Azenda, also called Azenda the Tyrant, is an assassin who used to be famous in the Talha galaxy, until she is defeated by Yami, ultimately bringing shame to her title. She made her debut in To Love Ru Darkness when she was summoned by Nemesis as part of her plan to turn Golden Darkness back into her old cold-hearted self.

Azenda has gold eyes and light blue hair (blond in the colored manga) with a long swirl-like pony tail and wears a tiara with a jewel on it. She has dark skin and quite a busty figure. She wears very revealing clothing that's colored red and black (white and black in the manga).

She can be quite arrogant which leads her to take action without thinking of the consequences of her actions, especially when it comes to getting revenge, like when she attacked Momo, knowing she is the daughter of the Deviluke king which was a big mistake in the end. On the other hand, she can be cunning at times, coming up with a plan before facing her target. She is also very selfish and plays dirty, like controlling others to do her dirty work, use ones weakness against them and tormenting (torturing) them in the process.

Azanda was part of an organization of assasins and was famous in the Talha Galaxy. When she had dispute with Yami, the two had a fight which Azenda lost to, thus losing her status as an assasin and has been holding a grudge against her ever since

Azenda was summoned to Earth by Nemesis, (however greeted by Mea instead who didn't take her so kindly) so that she may have her revenge on Yami, but in truth it was part of her plan to revert Yami to her old self. She later appeared before Rito and Yami with Mikan under her control and her fight them both, however Yami refuses to go all out to harm Mikan, much to Mea's disappointment especially when Azenda was defeated by Momo and flower cannon plants and later arrested by Zastin.

Azenda appeared again in Bangaihen 11/ Darkness OVA 4 after breaking out of Galactic Prison. She returned to Earth, where she was spying on the Yuuki residence and heard about Yami's weakness over anything slimy and tentacle-like, so she attempted to use this advantage to fight Yami again with a slimy, lotion covered Bio-Whip. However Yami cut her whip into pieces before she had a chance to use it and beats up Azenda. Yami threatens Azenda that she will kill her if she ever lays a hand on Mikan again, which she apologizes for.

In Chapter 70, she hires Kuro to assassinate Rito, who is intercepted by Nemesis and Mea. Since Kuro is stopped by Yami in her Darkness form, Azenda tries in Chapter 72 to kill Rito by herself but she is easily subdued by him when he stumbles making them fall and involuntary ending (as always since it's Rito) with him groping her.

Azenda has psychic powers that give's her the ability to control the movements her weapons or her victims.

Bio-Whip: Her primary weapon is her whip which she costantly uses in a fight, it can even partially rip ones clothes. She later covered this whip with lots of lotion after learning Yami's weakness toward slimy things, however this whip was soon sliced into pieces by Yami.

Hidden Wrist Blade: From her wrist comes out a small hidden blade.

Azenda in the past, defeated by Yami. 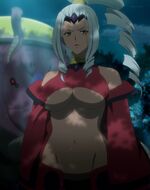 Add a photo to this gallery
Retrieved from "https://toloveru.fandom.com/wiki/Azenda?oldid=36673"
Community content is available under CC-BY-SA unless otherwise noted.