Kuro is a character in To Love-Ru and To Love-Ru Darkness. He is a hitman who knows Yami in the past, as he is the one who set her and Kurosaki Mea free from the Eden organization.

He is based on the main character of Black Cat, Train Heartnet.

Kuro has yellow eyes and messy black hair. He has a black collar around his neck and wears a black overcoat.

In To Love-Ru Darkness, his hair appears shinier, making him further resemble Train Heartnet in his heyday with the exception of the choker and absence of the tattoo on his chest.

He seems to be very moody and hardly shows any emotions. He also takes his work seriously, like when he would go against Yami if she would get in his way. If people consistently get in his way, he will become angry.

In Darkness Chapter 72, he smiled after Yami beat him in a battle, possibly showing he isn't as stoic as he appears to be.

Like Yami, Kuro was picked by up by an assassin organization that saw itself as "some kind of arbitrator of the universe" during his childhood.

Kuro was the one who destroyed the Eden organization that created Yami, setting her free. He has also fought Yami in the aftermath, but it's unclear who won the battle. Kuro also seems to be quite knowledgeable of Tearju Lunatique, but it's unknown if he knows her in person. Kuro has been hired to work with Zastin on missions and fought against him as well many times.

Kuro infiltrated a resort owned by the Tenjouin family where most of the main cast happened to be at the time and were aware that he might be after someone but unsure who (assuming it was one of the Devilukean princesses). Kuro has come across Yami once again, who tells her not interfere, as she tells him not harm her friends, including her target. When Kuro had encountered the main cast, he seemingly pointed his gun at Lala but was actually targeting Saruyama behind her, who turns out to be an alien named Khameleon, who was the one he was hired to eliminate for stealing top secrets from an intergalactic mafia.

Kuro is mentioned a few times in To Love-Ru Darkness, before later making an appearance in person. Yami thinks of him when thinking of Eden and Mea's master. He also appears in a flashback in Darkness episode 10 (this flashback is also shown in Darkness Chapter 14, though only part of his gun appears in the manga's flashback), where he is observing a younger Yami holding a sword. Zastin also contacted him for information about Eden and Nemesis some time before chapter 59.

Kuro was later hired by Azenda to assassinate Rito while the three Deviluke princesses are attending an event on their home planet. However, Nemesis protects Rito from Kuro's first attack at their home wile Mikan watches helplessly. Rito then runs off wile Mikan calls Yami asking her to save him. In the meantime Mea, hoping to tease Rito wile Momo is away notices Rito being perused by Kuro and interrupts the chase. She put up a short fight but Kuro notes after defeating her that she has grown too soft on Earth and is about to continue his attack Rito again when Nemesis appears, allowing Kuro to make the connection that Nemesis was using Rito and responsible for destroying his bullets at Rito's home.

Soon after, Yami appears and activates the Darkness transformation and defeats him in the ensuing battle, destroying his two guns. Before walking away with smile he stated that; "he wishes to quit the assassination business" and now plans to change like Yami and the others did.

Guns: Kuro's primary weapon is a gun he carries around for the use of his skilled marksmanship. This gun that can manipulate psychic energy and fire the energy in the form of bullets.(Chapter 150) 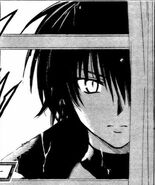 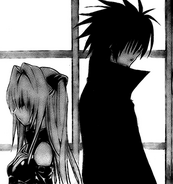 Kuro and Yami standing back to back.

Kuro in To LOVE-Ru Darkness.

A younger Yami with her arm transformed into a sword while Kuro watches.

Add a photo to this gallery
Retrieved from "https://toloveru.fandom.com/wiki/Kuro?oldid=40218"
Community content is available under CC-BY-SA unless otherwise noted.