Peke (ペケ,, Peke?) is Lala's all-costume robot, who acts as a module to form her clothing. Peke is exceptionally devoted to her creator, Lala, and is her most constant companion. She is almost always seen on Lala's head, as a hair pin and acts as her portable wardrobe.

Peke was often referred to as a boy in early manga chapters, until she revealed her ability to transform into a human-like girl.

Peke is small and her body is almost completely white. She has a round head with two thick swirl shaped black eyes (x shaped when out of power) and (dash shaped when sleeping or inactive) and visible no mouth and nose. Peke appears like she's wearing a white jacket with yellow edges, with a blue shirt and red tie in-between and sometimes devilish wings on her back. Peke can be easily mistaken for a toy by some kids, so to avoid this, she somehow is able to turn into a human-like girl with similar clothing and with robot disc-shaped hair brooches on her head.

Peke is loyal to Lala, but can also be quite helpful towards others who are friends to Lala, such as fixing their clothes, and helping Mikan recover her bag from a robber by enabling her to fly in costume form. Peke is generally polite, addressing people with the respectful honorific "-dono". She is often a quick thinker, reminding Lala about scheduled events, (mostly Television and such), helping Rito understand her behavior on their walk home through body language and helping in small time crises. However, she can also be quite blunt about what she thinks of other people.

Peke's most distinct ability is to transform into any type of clothing for Lala to wear and does so by scanning other people's clothes. During costume transformation and even as clothing she still controls it's movements. Her head would appear as a small pin somewhere on Lala, mostly as her hairpin. If this pin gets hit, Peke randomly changes into a different set of clothes or if she comes off, the clothes disappear leaving Lala completely naked.

Some of these abilities are accessable to whoever wears Peke.

Relationships with Other Characters

As Lala is her creator, it goes without saying that Peke is greatly loyal and obedient to Lala. Peke is Lala's most constant companion, and has been with her since her creation and when Lala ran away from home. While Peke considers Lala as a great person, admired for her beauty and intelligence, and finds any suitor unworthy of her, Peke is still aware of some of Lala's eccentricities. She questions Lala's judgement in choosing Rito as her fiancé, and her childish attempts at getting closer to him. And she says that despite being one of the greatest geniuses in the galaxy, most of Lala's inventions turn out to be toys or pranks.

Peke sometimes gives Lala advice about certain things like her relationship with Rito, like saying to her that it's not enough to keep her feelings aside for the moment and advices her to be more direct with Rito.

Peke does not think very highly of Rito as the fiancé of her Lala-sama. Though she doesn't particularly hate or tolerate Rito, at first, she finds him quite dull, dorky and unreliable, bluntly saying so, and encouraged Lala to think more seriously about who she chooses to marry. As time passed, though it's not clear what she now thinks of Rito, Peke at least stopped worrying about Lala marrying Rito, and congratulated Lala when Rito confessed his love for her. It's possible that Peke no longer sees Rito as she did before, respects Lala's choice in choosing him and supports their relationship (even Lala's idea of adding Haruna to it) to the point that she's willing to share Lala's secrets and childhood with him to get them closer.

Peke transformed into a fancy attire for the Christmas Party. 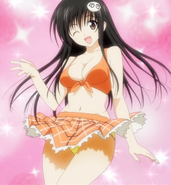 Add a photo to this gallery
Retrieved from "https://toloveru.fandom.com/wiki/Peke?oldid=36648"
Community content is available under CC-BY-SA unless otherwise noted.