Ren Elsie Jewelria is a childhood friend of Lala and the boy version of Run Elsie Jewelria. As Ren and Run are royalty from planet Memorze, they can change gender in mind and body upon triggering a specific stimulus; in their case, a sneeze. Ren likes Lala, while Run likes Rito. Ren hates Rito because Lala likes him, while Run hates Lala because Rito likes her.

In Chapter 9 and episode 6 of To Love-Ru Darkness, Run and Ren permanently separated into two separate beings after reaching 'adulthood'.

Ren has hot pink eyes and the top of his hair is white with two points sticking out, while the bottom back part is black, during his first appearance many girls took a liking to his looks.

However in the To Love Ru Darkness manga the top of Ren's hair is shown to be light blue and dark blue on the bottom back.

Ren's personality can be described as determined, but stubborn (especially where Lala is concerned). In the first series of To-Love-Ru, he constantly tries to prove that he is a real man to Lala, who passively promised to marry him if he became more manly (although she doesn't recall it) by competing against Rito to pointless challenges. Ren would overly complement on Lala's beauty and her kindness towards others.

In To-Love-Ru Darkness, Ren's appearances become less frequent, but he seems to have become more calm and mature. He doesn't seem to try to impress Lala or try to compete against Rito anymore, so it's possible that he has accepted him as Lala's lover, although Ren still shows his love for her.

As a child, Ren sometimes would be taken to Deviluke to play with Lala. Despite all the trouble she put him through with all her experiments and mischief, he apparently falls in love with her and cherishes all of those memories with her. However, his female counterpart remained angry at Lala for all of the abusive fun Lala had with them. Ren one time asked Lala if they would get married if he becomes a real man, which she agreed to but doesn't remember it. 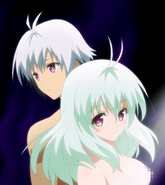 Add a photo to this gallery

Retrieved from "https://toloveru.fandom.com/wiki/Ren_Elsie_Jewelria?oldid=36670"
Community content is available under CC-BY-SA unless otherwise noted.