Tenjōin Saki is the arrogant self-proclaimed queen bee of the school. She is currently in her third-year. Saki consistently tries to defeat Lala in everything, stating there can only be one "queen" in Sainan High. She even tries to seduce Rito to make Lala jealous (despite not loving him), but later, she falls in love with Zastin. She once teamed up with Run Elise Jewelria to make Lala look bad in front of Rito and to prove that Saki is the queen of all things.

Saki has golden eyes and light blonde hair that's lightly permed in the back and curled into spirals over her shoulders, with two small buns on both sides of her head held by red ribbons. Her 3-sizes are B84-W56-H85. 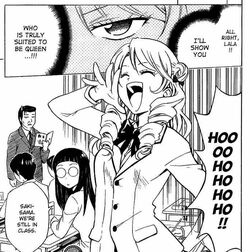 Saki can be stuck-up and full of herself, and she is quite competitive, especially to Lala, whom she considers her greatest rival. She is determined to prove that she is a magnificent person, and even gives herself many different titles as a self-proclaimed queen. She is highly arrogant and believes that no one is greater than her. She also has a proverbial laughter that is very stereotypical to her stuck-up personality.

On the other hand, she has a kind side to her, as she saved Aya from bullies and cares for her deeply as one of her closest friends along with Rin. She basically feels competitive towards anyone who might rival her glory, but otherwise, she can be quite courteous and hospitable even towards humble people, seeing their needs and desperations if they come off well enough. She often tries to earn the love and glory she wishes to receive from people by serving them with her own wealth, such as when she hosted a Christmas party for various people and other students, when she invited classmates to her private beach, and when she served food to her servants. She is very caring towards her friends, and is polite and grateful towards her domestic workers and guardians, showing a great deal of worry for them and never looking down on them as mere servants or commoners.

Her name (沙姫 - Saki) can be roughly translated as "The Sand Lady".

Retrieved from "https://toloveru.fandom.com/wiki/Tenj%C5%8Din_Saki?oldid=36707"
Community content is available under CC-BY-SA unless otherwise noted.