This article is about the anime. For its original manga, see To Love-Ru Darkness (Manga)

To LOVE-Ru Darkness (To LOVEる -とらぶる- ダークネス, To Raburu -Toraburu- Dākunesu?) is the sequel to the To LOVE-Ru and Motto To LOVE-Ru anime, based on the manga series of the same name, To LOVE-ru Darkness.

The first season of To Love Ru: Darkness anime series is composed of 12 episodes and 6 OVAs. Each OVA is a filler side-episode consists of two or three story segments, while adapting random manga chapter. The first OVA served as the pilot episode before the TV series aired and following on. The series was announced on March 31, 2012 and the first episode aired on October 5 of the same year on Tokyo MX. The anime is produced by Xebec and directed by Atsushi Ootsuki.

The anime adaptation of the sequel focuses on more maturity than the previous anime sequels. The series still retains its usual perverted comedy, except with a serious focus on its story plot and character development, especially around Yami. The series provides more censored fan service during TV airing, while following closely to the manga.

As close encounters of the twisted kind between the residents of the planet Develuke (represented primarily by the female members of the royal family) and the inhabitants of Earth (represented mainly by one very exhausted Rito Yuki) continue to escalate, the situation spirals even further out of control. When junior princesses Nana and Momo transferred into Earth School where big sister LaLa can (theoretically) keep an eye on them, things SHOULD be smooth sailing. But when Momo decides she'd like to "supplement" Rito's relationship with LaLa with a little "sisterly love," you know LaLa's not going to waste any time splitting harems. Unfortunately, it's just about that point that Yami, the Golden Darkness, enters the scene with all the subtleness of a supernova, along with an army of possessed high school students! All of which is certain to make Rito's life suck more than a black hole at the family picnic. Unless, of course, a certain semi-demonic princess can apply a little of her Develukean Whoop Ass to exactly that portion of certain other heavenly bodies! 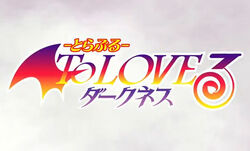 A PS-VITA RPG story action game titled To Love-Ru Darkness: Battle Ecstasy, was released on May 22, 2014. It was developed by FuRyu, developer of Unchained Blades.

Retrieved from "https://toloveru.fandom.com/wiki/To_LOVE-Ru_Darkness_(anime)?oldid=36181"
Community content is available under CC-BY-SA unless otherwise noted.